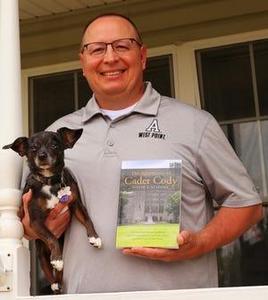 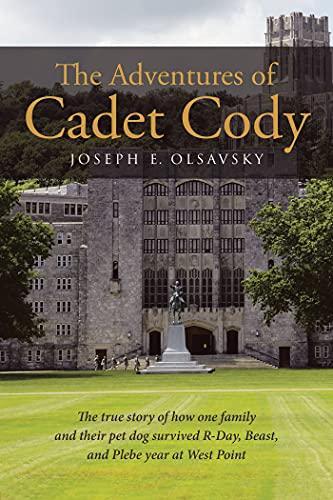 Congratulations to Joe Olsavsky ’82 who recently published a non-fiction book about his family’s experience with their son’s appointment to the U.S. Military Academy at West Point, featuring their family dog Cadet Cody. The book illustrates Joe’s love and commitment to family and their faith and tells an interesting story along the way. Find out how you can get a copy.

Joseph Olsavsky ’82 recently fulfilled a lifelong goal of becoming a published author. His non-fiction book, The Adventures of Cadet Cody,” was released earlier this year by Page Publishing. The 208-page book follows the family’s journey, along with their chihuahua/cocker spaniel mix Cadet Cody, as their son Nate attends the United States Military Academy at West Point.

The book was born out of a series of eleven letters that the family wrote to Nate during his first year at West Point, including photos and stories about Cody and the family. Cody was a gift to their youngest, Sam, who had spinal fusion surgery in March 2017 and was missing the last marking period of school to recover. Joe and his wife Cathy thought Cody would make a good companion for Sam during his recovery. Nate began his West Point appointment in July the same year.

The story follows the family’s experience with events in which other military families can identify, like Reception Day, Family Weekend, the Army/Navy football game and Acceptance Day, as well as the sights between their home in Friedens, Somerset County, and West Point.

Joe told the Daily American: “It’s always been a lifelong dream of mine to write a book. West Point is so awe-inspiring, it leaves you spellbound. We experienced so much there, I started jotting down notes and the ideas continued seamlessly afterwards.”

The book is getting great reviews from friends, including this one that Joe forwarded along to the BC alumni office:

“Hi Joe.  I just finished "The Adventures of Cadet Cody."  I wanted to tell you and Cathy how much I enjoyed reading it.  Three things stand out to me. Your faith, your love of your family and how proud you are of Nate, Sam and Hillary.   Thank you for a glimpse of what Nate's life was like at West Point.”

Joe said, “I’d be remiss if I didn’t acknowledge that our family’s faith is rooted in my BC days.”

Nate graduated from West Point in May 2021 and was commissioned as a second lieutenant in the U.S. Army. He will go on to officer leadership training at Fort Leonard Wood in Missouri, then to Hawaii for his first duty assignment. Joe has agreed to serve as a West Point field force representative encouraging local youth to apply for an appointment to the academy.

Sam recovered well from surgery and is starting his sophomore year at WVU in aerospace and mechanical engineering. The Olsavskys also have a daughter, Hillary.

“The Adventures of Cadet Cody” can be ordered in paperback or e-book versions through Amazon, Barnes & Noble, iTunes and Google Play.