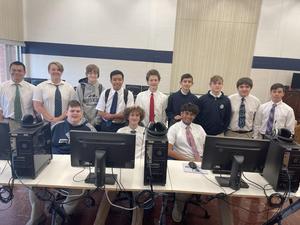 The Huskies Esports team had an exciting year, as we played two seasons with local league The Esport Company, and added in a new game, Valorant. Read on to find out some exciting news!

The fall season saw our Rocket League and Overwatch teams returning from their first season last spring.  Our Division 1 Rocket League team, the league's defending champions, once again had an incredible season and playoff run to the championship round, thanks in part to captain Aydin Swander, who led the league in points for the season.  Unfortunately, in the championship match, we lost 3-1 to our long-distance rivals from Penn Trafford.  The Overwatch team, led by co-captains Olivia Burk and Ayden Smorto, had an excellent regular season, but fell to Johnstown in an incredibly close semifinal match.

The spring season brought several new challenges, including skilled new teams joining the league, that made for a highly-competitive six weeks.  Our brand-new Valorant team, headed by captain Evan Scarton and alternate captain Luke Herald, was test by an abbreviated pre-season and a challenging schedule, but was still able to make a playoff appearance in their first season.  While the team fell in the first round to the more experienced Johnstown, the players made impressive gains during their first season, and are ready to compete again in the fall.  Both Rocket League teams also made playoff appearances despite difficulties throughout the season but were eliminated by Forest Hills in the first round.  The Overwatch team had an incredible 5-1 regular season and looked strong to make their first championship appearance, but fell in another close semifinal round, this time to newcomers from Windber.

In addition, every team making playoff appearances, including semifinal and championship rounds, the esports team is excited to send three players, captains Aydin Swander and Ayden Smorto, as well as Overwatch player Tommy Bernard, to The Esport Company's High School League All-Star game this July.  We are proud of our three all-stars, as well as all of their teammates who supported them and helped them achieve in-game throughout the year.

Looking ahead, the Valorant team is ready to put what they have learned in their first season to the test, while the Rocket League team is hoping to reclaim their place as champions.  The Overwatch team, meanwhile, has a streak of semifinal appearances that they are ready to turn into a championship run and a long-overdue shot at the title themselves.  With all of this in store, as well as new games ready to be added to the mix, the 2022-2023 year is sure to be the Huskies' most exciting yet.