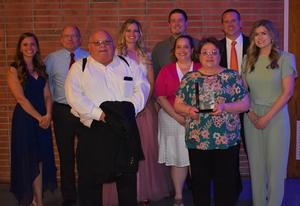 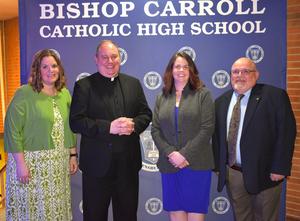 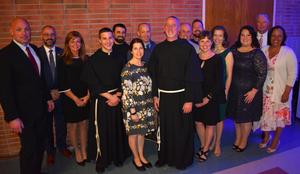 At the 13th Annual Carrollian Gala, the Bishop Carroll community presented several individuals with awards for their achievements in the world and their contributions to Bishop Carroll Catholic High School.

On Saturday, April 30, Bishop Carroll Catholic High School held its thirteenth annual Carrollian Gala.  At the fundraising event, several individuals and groups were presented with honors for their contributions to the school community and the world at large.

The Bishop Carroll Cornerstone Award is given to those who have made a lasting impact on the school community.  Saint Francis University was honored as a Cornerstone recipient for their commitment to a long-standing academic partnership with Bishop Carroll.  SFU President Father Malachi Van Tassell accepted the award and spoke on the school’s behalf.  Father Malachi stressed a “common mission” between the two schools, stating, “We are intertwined in many ways.  We are geographical neighbors and fellow Catholic institutions.  Many Bishop Carroll graduates are also SFU graduates, and some faculty at both schools are alumni of the other.  We are members of the Body of Christ in a relationship with the one true God.”  Father Malachi went on to explain the partnership, including the college in high school and professor in residence programs, as well as the articulation (financial) agreement for Bishop Carroll graduates who attend SFU.  He concluded by emphasizing that, “Saint Francis is proud to share the commonality of a mission with Bishop Carroll, seeking to educate students in the Catholic faith with a comprehensive education, focused on the body, mind, and spirit to allow students to take their place in society as moral, upright, Catholic citizens.”

The second Cornerstone Award was given to the family of Paul and Agnes Rhoades.  Paul and Agnes sent their five children through Bishop Carroll, even moving to Ebensburg to make that possible. Twelve grandchildren have attended BC and currently one great-grandchild is at the school.  Paul and Agnes’ grandson, Daniel Link, spoke on behalf of the family.  He stated that Paul and Agnes were deeply involved in the education of their children and attended every event they could and chaired various fundraisers.  They continued that involvement with their grandchildren and listened to all BCCHS sporting events on the radio.  In his younger days, Paul even helped construct the metal guardrail that lines Husky Hill.  Daniel said of his grandparents, “They showed us that actions speak louder than words.  Be kind, honest, help others, be proud, and respect yourself and others.  Respect was a trait that both of my grandparents showed us by action.  Respect your elders, teachers, religious figures, and the church.  These same values were shared with this school and the education that we received.”

In addition to the Cornerstone Awards, four individuals were chosen as Distinguished Alumni Award winners.  The recipients all used the foundations they received at Bishop Carroll and have made the world a better place.  The winners included:

1967 graduate Jim Vetock, who was an outstanding football player during his years at BC, and he and his wife, Pam, encouraged their sons, Jeb and Judd, to be involved as well.  Jim, along with Pam and his brother Rich, founded Specialty Promotions, which now also includes The Pittsburgh Gift Shop, over 40 years ago.  Specialty Promotions is responsible for clothing many athletic teams over the years and provides the majority of spirit items at the school.

1985 graduate, the Very Reverend John D. Byrnes, is the Judicial Vicar for the Diocese of Altoona-Johnstown.  Father Byrnes graduated from the Pontifical College Josephinum and later attended seminary at the Pontifical Norther American College in Vatican City.  While in Europe, he worked with Mother Teresa’s Missionaries of Charity, and participated in many mission trips.  He was ordained a priest at the Cathedral of the Blessed Sacrament in Altoona in 1994.  He has served in various roles throughout the diocese, including Vocations Director, Pastor at Saint Aloysius, and various committees.  In addition to his role as Judicial Vicar, Father Byrnes also is the current rector at the Basilica of Saint Michael the Archangel in Loretto and the Bishop’s Delegate for the Cause of Canonization of the Servant of God, Demetrius Gallitzin.

1995 graduate Dr. Susan McNulty-Atwater earned a Bachelor of Science in Agricultural and Biological Engineering from Penn State with a specialization in Food Engineering.  She completed graduate studies in Grain and Milling Science from Kansas State University in 2013 and graduate engineering courses in Platform Engineering from MIT.  She has worked as a Product Engineer at Kraft Foods and a Process Engineer for HJ Heinz, and a Process Engineer for General Mills.  She is currently a Processing Project Engineering Manager at HP Hood LLC.  Susan is responsible as a lead engineer for many common products that adorn the refrigerators and shelves of almost all households.  She was the recipient of the 2019 Outstanding Engineering Alumni Award from Penn State, which is the highest honor bestowed by the Penn State college of engineering.  She also serves as one of twenty engineers and FDA/USDA scientists on the national steering committee that governs all sanitary equipment designs and 3A standards for the US’s pharmaceutical and food industry.  She and her husband also own and operate a 2,000+ cow and heifer dairy farm in Barker, NY.

2005 graduate Dr. Elizabeth Hines is an animal physiology scientist and Assistant Professor for Penn State University.  She is also the State Swine Extension Specialist at Penn State.  In this role, she works to utilize her combined academic and industry experience to conduct research that improves health and welfare of pigs as well as efficiency of pork production while serving to educate students and producers alike on the opportunities to serve both within and beyond the swine industry.

The entire Bishop Carroll community is grateful for the contributions that these individuals have made to the school and the world at large.  For complete biographies of the award winners, please visit https://www.bishopcarroll.com/apps/news/article/1608421.