Who Was Howard J. Carroll? 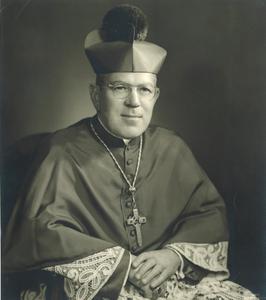 The name "Bishop Carroll High School" has been used since the early 1960s, but few know the background of our namesake. Read the summary of Bishop Carroll's biography and see the link for the complete history of this impressive man.

Bishop Carroll Catholic High School has been in existence since 1959, but many today know very little of the school’s namesake, Howard J. Carroll, fourth Bishop of the Diocese of Altoona-Johnstown.  Here is a summary of his life and legacy.  A more complete biography can be found on the school’s website (www.bishopcarroll.com) under About Us > History, and scrolling to the bottom of the page.

Howard Joseph Carroll was born on August 5, 1902, in Pittsburgh, Pennsylvania to William J. and Margaret (Hogan) Carroll. The oldest of three boys, Howard attended Holy Rosary grade school and high school in the Homewood section of Pittsburgh.  Howard’s younger brothers, Coleman, and Walter, both became priests, with Walter serving as a member of the Vatican Secretariat of State under Pope Pius XII, and Coleman ordained an Auxiliary Bishop of Pittsburgh, and later named the first Bishop and Archbishop of the newly formed Diocese of Miami, Florida.

Carroll attended Duquesne University and then transferred to Saint Vincent College, where he earned Bachelor of Arts and Licentiate of Philosophy Degrees.  He then attended seminary at the University of Fribourg in Switzerland.  After ordination, Carroll returned to the Pittsburgh Diocese and served as assistant pastor at Sacred Heart Parish.  In 1939, he was elected Assistant General Secretary of the National Catholic Welfare Conference (NCWC) (the predecessor of the current USCCB), and later accepted the post of General Secretary in 1944, a post he held until his appointment as Bishop of Altoona-Johnstown.

Bishop Carroll also served in other prominent posts.  He worked during World War II to further French-American relations with the War Relief Services and was honored for his work.  He also was a member for the United States on the Supreme Council for Emigration of the Sacred Consistorial Congregation in Rome, was the secretary of the board of trustees of the National Catholic Community Service, and was a director of the United Service Organization (USO).

Through his brother Walter, who worked for Pope Pius XII, Carroll became friends with Monsignor Giovanni Battista Montini, who would later become Pope Paul VI.  Carroll even hosted Montini on a visit to the United States in 1951, when he came to visit Carroll’s mother Margaret to offer sympathies for Walter’s passing.

On December 12, 1957, Pope Pius XII appointed Monsignor Carroll as the fourth Bishop of the Altoona-Johnstown Diocese, following Bishops Garvey, McCort, and Guilfoyle.  He was consecrated a bishop in Washington, DC on January 2, 1958, and installed as Bishop of Altoona-Johnstown on January 23, 1958, by Archbishop (later Cardinal) John Francis O’Hara of Philadelphia.  Carroll came to the diocese as a well-known and well-respected individual within the Catholic church and immediately began his ambitious agenda.

Some of his accomplishments as Bishop include the completion of the Cathedral of the Blessed Sacrament, the restoration of the library at Saint Francis University, the establishment of a seminary in Loretto under the leadership of the Third Order Regular Franciscans, the creation of the Diocesan Board of Education, and the building or restoration of 13 parishes, 11 schools, 3 convents, 5 parish halls, and 3 rectories.  However, what he considered to be his primary and most celebrated project was the establishment of Catholic boys and girls high schools in Ebensburg.  Aquinas Hall was founded as a boys school and Saint Joseph Academy was founded as a girls school.  The two schools would eventually merge into the newly built high school, which would bear the name Bishop Carroll High School, named after Bishop Howard J. Carroll, under Bishop Carroll McCormick.

In March 1960, Bishop Carroll suffered an unfortunate stroke and passed away on March 21.  The news shocked everyone, considering there were no signs of illness for the rather healthy 57-year-old Bishop.  His death left a void in the diocese that would be filled several months later by Bishop McCormick, who worked to carry on and finish the projects started under Bishop Carroll.

The mission of Bishop Carroll Catholic High School states,  “Bishop Carroll exists to educate students in spirit, heart, mind and body within a Catholic framework of gospel values to become the best possible members of their families, communities, church and world. To achieve this end, we rely on a dynamic academic program, based on traditional Christian values, supplemented, and enriched by the collaboration of generous, talented people from the local community and church.”  In following through with this mission, the school is carrying on the work and vision started by Bishop Carroll.  The school has thrived and will continue to thrive and grow long into the future.

Bishop Howard J. Carroll was a focused and ambitious man, constantly seeking to further God’s work here on earth.  It is not a coincidence that the school that we call home is named after this man.  Now in its’ seventh decade of existence, Bishop Carroll Catholic High School continues to provide an outstanding education to students in our region.