Esports Championship in Year One! 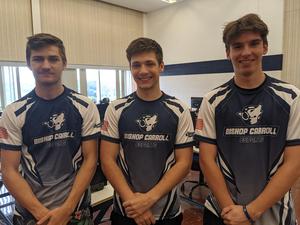 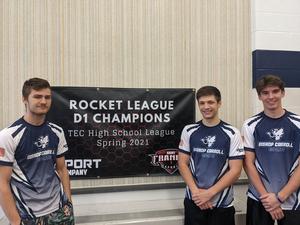 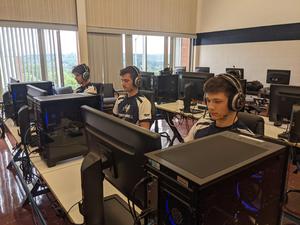 Bishop Carroll Esports was a huge success in the first year of the program, including our Rocket League Team bringing home the championship. Read about the team and the goals for the future.

Bishop Carroll Catholic High School began a partnership with The Esport Company (TEC) and Saint Francis University Esports in September 2020 to begin a program on Husky Hill.  The school, through the help of several donors and the commitment of the Board of Trustees and Administration, installed a state-of-the-art facility.  Two staff members stepped up to help coach the team.  And then the students took it from there!

2021 graduates Ely Blaisdell and Ryan Bohrer, along with rising sophomore Max Oravec, made up Rocket League Team A.  The team went undefeated during regular season league play and then proceeded to win the first ever TEC Championship, hosted by Saint Francis University.  This was a major accomplishment for the students, the program, and the school.

Ely, Ryan, and Max all commented that one of the best aspects of being involved with Esports is that it brings people together and everyone feels included.  All three have been active gamers with Rocket League and enjoy having the chance to play competitively.  In fact, Ryan will continue playing competitively while attending Saint Francis University.

All three are very appreciative of the opportunity that Bishop Carroll has provided them to participate in an activity that they love.  Ryan commented, “It feels great to have a dedicated area to play without distractions and it is nice to see how our efforts paid off.”  Ryan was also very instrumental in the setup and design of the Esports arena, constructing and donating the tables. Ely, who also assisted in putting the room together, and is now attending the Merchant Marine Academy, said, “Having the facility on campus makes it a lot more fun, as you are in the same room.  Also, being on the championship team is really cool, since it is the first one, not only for the school, but in the area.”  Max, who will be the leader of the team for the upcoming year, added, “It is very nice to have the technology and advancements to play the games on and being the first champions is great and will up our standards for the upcoming years.”

The boys are aware of the negative connotations with gaming and hope that they can show others the positives of the experience.  In addition to earning a scholarship at SFU through Esports, Ryan says that gaming has helped him relieve stress.  Max says that gaming helps him feel good and loves interacting with not only his teammates but those on other teams at other schools.  Ely echoes both of their sentiments with a simple, “It’s fun and I’ve made some great friends.”

Even though the experience was great for the students this year, they are looking forward to seeing the program at Bishop Carroll grow. Ely and Ryan, looking out for underclassmen and future Huskies, want to see the school add more programs and championships, as well as help each student secure scholarships for college.  With Ely and Ryan graduated, Max needs new teammates!  He said, “I want to see our teams grow to the point where we have to add new teams and new games!”

In addition to Ryan’s scholarship to Saint Francis, Kody Krug was also offered a scholarship to play Super Smash Brothers, a game that Bishop Carroll was not even able to offer in year one.  However, thanks to generous donors, a Nintendo Switch was purchased to allow for students to compete intramurally.

Luke Trotz, Director of Esports at Saint Francis University, had nothing but positives to say about our team and our program.  "The inaugural season for the TEC High School Esports League was a major success. We appreciate the schools that rose up and joined the movement of organized esports, which also exposed their students to college, and career opportunities through esports.  Specifically, the Bishop Carroll Esports program truly led the way by becoming the first school in the Laurel Highlands region with a dedicated esports facility. Additionally, their program is producing talent as the DI Rocket League champions, and two of their players received collegiate esports scholarships in year one."

Bishop Carroll currently sponsors teams in Rocket League an Overwatch through TEC League, with the possibility of expanding to include League of Legends, among other games.  Sponsorship opportunities are available by contacting the school.  Further expansion of the program depends on the generous support of the community.  The program has several needs to fill, including additional furniture and equipment, league fees, and renovations.