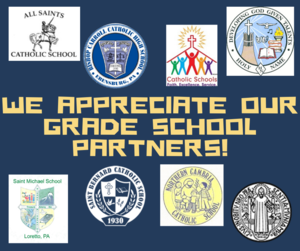 We celebrate our partnerships with the Prince Gallitzin Quadrant grade schools. Read the story about their history and goals. Contact information is also included. An investment in a K-12 education is worth it!

All Saints Catholic School, under the auspices of the Altoona-Johnstown Diocese, opened its doors in the fall of 1989. The school is a merger of two former schools located in Cresson: St. Francis Xavier Catholic School and St. Aloysius Catholic School.

St. Francis Xavier Catholic School- The school's cornerstone was laid in April 1923, and the building was completed and ready for occupancy in January 1924. The Sisters of Mercy began teaching the students.

St, Aloysius Catholic School - In 1962, during the pastorate of the Rev. Bernard O’Malley, a school and convent building was constructed. The Sisters of the Immaculate Heart of Mary lived in the convent and taught the students.

All Saints Catholic School is located in the former St. Francis Xavier School building on Powell Avenue. It initially opened with students enrolled in kindergarten through grade 8 for students of St. Francis Xavier and St. Aloysius parishes. A preschool program was added for the 2006/07 school year.

St. Francis Xavier and St. Aloysius parishes are now clustered with one priest serving both parishes and the school.

Holy Name is a Catholic school community rooted in the traditions of our religion and broad
educational opportunities. Our ultimate mission is to form students to become disciples of
Jesus, so to prepare them for the challenges of living in a global society.

We believe that reverence, respect, and responsibility are integral values in the growth and
success of every individual, both within the school and within the community.

We believe, as a faith-based community with immersive faith experiences, that our students
will develop a passion for service and exhibit virtuous citizenship and a respect for diversity.

We believe that our progressive academic curriculum prepares students to be leaders in a
digital global society and inspires them to strive for personal excellence.

It is the aim of Holy Name School that as a result of a student’s educational experience, a graduate will: REVERENCE, RESPECT & RESPONSIBILITY

PASSION FOR SERVICE AND VIRTUOUS CITIZENSHIP

2/28/1968     -Fr. James Schuster and a New York reporter visit all Extensions in order to observe and study the Consolidated School.

1980 – Holy Cross building was closed and there were 286 students enrolled in NCCS.

1987 – St. Stanislaus Kostka building was closed and there were 243 students enrolled in NCCS.

1990 – The long-awaited day of Groundbreaking for the addition of our Catholic School finally took place on Wednesday, October 31.  The festivities of the day began with a Eucharistic Celebration of a joint student body participation.  Very Rev. Ronald Osinski, Pastor of the Consolidation, was the main celebrant along with pastors of the participating parishes as concelebrants.

Each grade was represented in the Offertory Procession.  Since the children have been praying to St. Joseph the carpenter, asking his help with the building, the Kindergarten Class carried a statue of St. Joseph.  the plans of the new addition and a picture of the same, a building brick, the Holy Bible, a school bell, the spade, which was used in the official groundbreaking, the pledges of monetary help and the bread and wine used at the Eucharist were all brought to the altar.

After the Mass, the children received balloons which were launched after the official ground blessing was said and the customary spade full of ground was overturned.  After Very Rev. Ronald Osinski, Pastor of the Consolidation and Sister Jane Mary Protsko, Principal, traditionally broke the ground, each Pastor in order signified cooperation by doing the same.  Sister Mary Alexander Klawinski, Provincial Superior of the Felician Sisters also took her turn to turn over the ground on the new site.

In attendance were all the school children, parents and friends and the Provincial Administration of the Felician Sisters; SM Cabrini Procopio, SM David Krasowski, SM Lee, the Felician Director of Education.

The festivities ended with “God Bless America” played on the trumpets by the school band directors, Mr. Dipyatic and Mr. Cannon.

1992 – August 13 -Trucks, vans, cars, U-Hauls were utilized to move furniture, desks, books, etc. from St. John’s Extension, Barnesboro to the new addition of NCCS in Nicktown.  The cooperation of the people in the consolidation was most overwhelming and proved sincerity of all concerned with the new addition.

The new pastor, Reverend Claude Pollak, OSB arrived at Nicktown to assume duties of pastorship in the consolidation.

September 1, 1992 - Students from grades five to eight opened their 1992-1993 school year at the newly constructed addition in Nicktown.  The name of the entire building was Northern Cambria Catholic School and no longer St. Nicholas Extension.  The enrollment for this year was 170 students including Kindergarten to grade eight.  A Pre-School had opened this fall with an enrollment of thirteen children.

2013 – The Felician Sisters withdrew and NCCS for the first time has a lay principal – Mrs. Theresa Burba

2015 – NCCS has an enrollment of 113 students in Kindergarten through 8th grade and 5 pre-school students.

Prince Demetrius Gallitzin first visited this area in 1795. He held Catholic education in high esteem. In conjunction with his goal to establish a strong Catholic community, he felt it was important to provide a solid Catholic education to the children, free from outside influences.  From 1890 to the present, the mission of St. Michael School is to foster and maintain the fourfold purpose of Christian education: message, community, service, and worship.

We, as Catholic educators, accept the responsibility to effectively fulfill these goals through which each child's personality and talents are nurtured while living out God's kingdom and message.

Saint Michael the Archangel Parish built its school in 1890 and used it as a parish hall until 1921, when under the direction of the Very Reverend Father Hackett, it was converted into a school. The school contained four classrooms -two grades in each room. The school was staffed by Mercy sisters with Sister Mary de Lourdes serving as principal. The school continued to serve the community of Loretto, providing students with an opportunity to receive a Catholic education.

During the late 1950's the administrators were informed that, due to structural difficulties, something had to be done in order for the school to remain. The decision was made to construct a new school building in the exact area of the old building. On April 11th, 1959, the school building was razed to make way for the new school. In order to maintain classes, the faculty, staff, and students held classes in both the church basement and the convent. Then, on May 1, 1959, a groundbreaking ceremony was held with the Reverend Father Paul A. Lenz, administrator, turning the first shovel of earth. The building was erected by the men of Saint Michael's Parish under the direction of Ferd Knopp and Leo Soisson. Monies to fund the building were raised through a parish level campaign. As the new school year drew near, the crew worked diligently, and the students were able to begin classes in the new building on November 23, 1959.

A ceremony was held on December 10, 1959 to bless the opening of the new school. The Most Reverend Howard J. Carroll, Bishop of the Altoona-Johnstown Diocese, was celebrant for the solemn pontifical benediction and blessing with over 600 people in attendance.

Saint Benedict Catholic School began operation by the Benedictine Monks in 1855 in the basement of Saint Benedict Catholic Church. This was the first Catholic Elementary School to be established by the Benedictine Order. In 1878 a four-room brick school building was built to house the students, and then in 1919, a larger brick addition was added.  In 2000 the school was completely renovated inside and out.  The newer school building includes a state-of-the-art science and computer labs with completely updated hardware in 2020.

Saint Benedict is an elementary school presenting the three- fold mission of the Catholic Church.

To witness the message of Jesus.

To build a community with Jesus Christ as center.

To serve God’s people through love, support, and prayer.

We strive using the Pennsylvania State Standards and the Diocesan curriculum to teach students the truths and values of the Catholic faith rooted in Benedictine spirituality and the practical applications of learning.  The school aims to develop within the students a sense of positive self-awareness and mutual respect by providing a friendly, supportive, and secure environment.

Administration, faculty, and parents work collaboratively to provide each child with an individual opportunity to continue to grow and apply their knowledge.  Realizing that parents are the primary educators of their children, we understand that what we teach at school will be nurtured at home, utilized throughout their educational careers, and displayed throughout life.

1847-Catholics are served by churches in Blairsville and elsewhere until 1847 when twenty German families came together to build St. Bernard Church on Oak and Mahoning (Fifth) Streets.

1861-Rev. Ferdinand Wolf oversees building of St. Bernard's first Catholic School. School was staffed by two Sisters of St. Agnes and a Captain Snickberger and classes were offered in English and German. This early school did not thrive and closed in a few years.

1884-American bishops met in the Third Plenary Council of Baltimore (1884). There they put forth a plan for the establishment of a comprehensive parochial school system. They directed local churches to establish elementary schools for the education of the parish children. Across the nation, elementary and secondary schools would develop religious curriculums emphasizing Catholic doctrine along with a secular curriculum very similar to that of the public schools.

1898-Rev. Neil McNelis, born in Ireland and educated at St. Francis College and St. Vincent's College, is assigned to St. Bernard's Parish after serving as Superintendent of Schools for the Diocese of Pittsburgh. In the third decade of the 20th century, he was joined by Assistant Pastor, Fr. James Brady, also born in Ireland.

1930-Fr. Brady led the parish in a fundraising campaign to finance the building of a second school (the first had burned in 1887). Funds were raised through parties and dinners hosted by Ladies' Aid societies, through paper drives held by the parish children and donations from the Knights of Columbus and the Catholic Daughters of America. The new school was built on Fifth Street, a block from the church. Formal dedication was held on August 29, 1930.

1930-St. Bernard School opened offering classes in six grades to 120 students. Sisters of St. Joseph of Baden made up the teaching faculty. The principal was Sr. Mary de Lellis. (September)

1931-1932 Seventh and eighth grades are added to St. Bernard School

1953-For two decades, school was taught exclusively by Sisters of Saint Joseph. In 1938, a lay teacher, Mrs. Anne Vogel, was hired.

1958-A second lay teacher was hired, a two-room addition added, and enrollment reached 375. The Regina Guild organized the first library.

1978-Construction of the Church on a hill above the cemetery separated the Church from the school.

1987-Msgr. Robert Shuda, former head of diocesan education, was appointed administrator of parish and a major fund-raising campaign was launched to finance a new Learning Center. $ 950,000 was raised to finance the new facility.

1990-New Learning Center with seven classrooms, a library, an adult education room, all-purpose room, and offices on Clairvaux Drive, near the church, was dedicated. (August)

2009-St. Bernard Regional Catholic School, the only Catholic School in Indiana County, offers a fully accredited program that is staffed by certified teachers with impressive academic credentials. Embedding spiritual studies in a rich curriculum which includes art, music, and technology, its students score above the national average on standardized tests. Its alumni continue to excel academically in high schools and at universities across the nation.